Tracking sleep with your phone

If you don't have a dedicated fitness tracker strapped to your wrist or clipped to your hip, you've probably found that you can track most of the same stats with your phone anyway. If you have an iPhone 5s, the M7 chip makes this even easier, but most smartphones have accelerometers to track your movement.

There are plenty of options for sleep-tracking apps, and a couple of the most popular apps have recently expanded to cover both iOS and Android. For most of these apps, you'll need to leave them running and place your phone on your mattress near your pillow so they can detect your movement during the night. Before we explore the options for sleep-tracking with your phone, let's take a look at how these apps work and whether they're accurate. 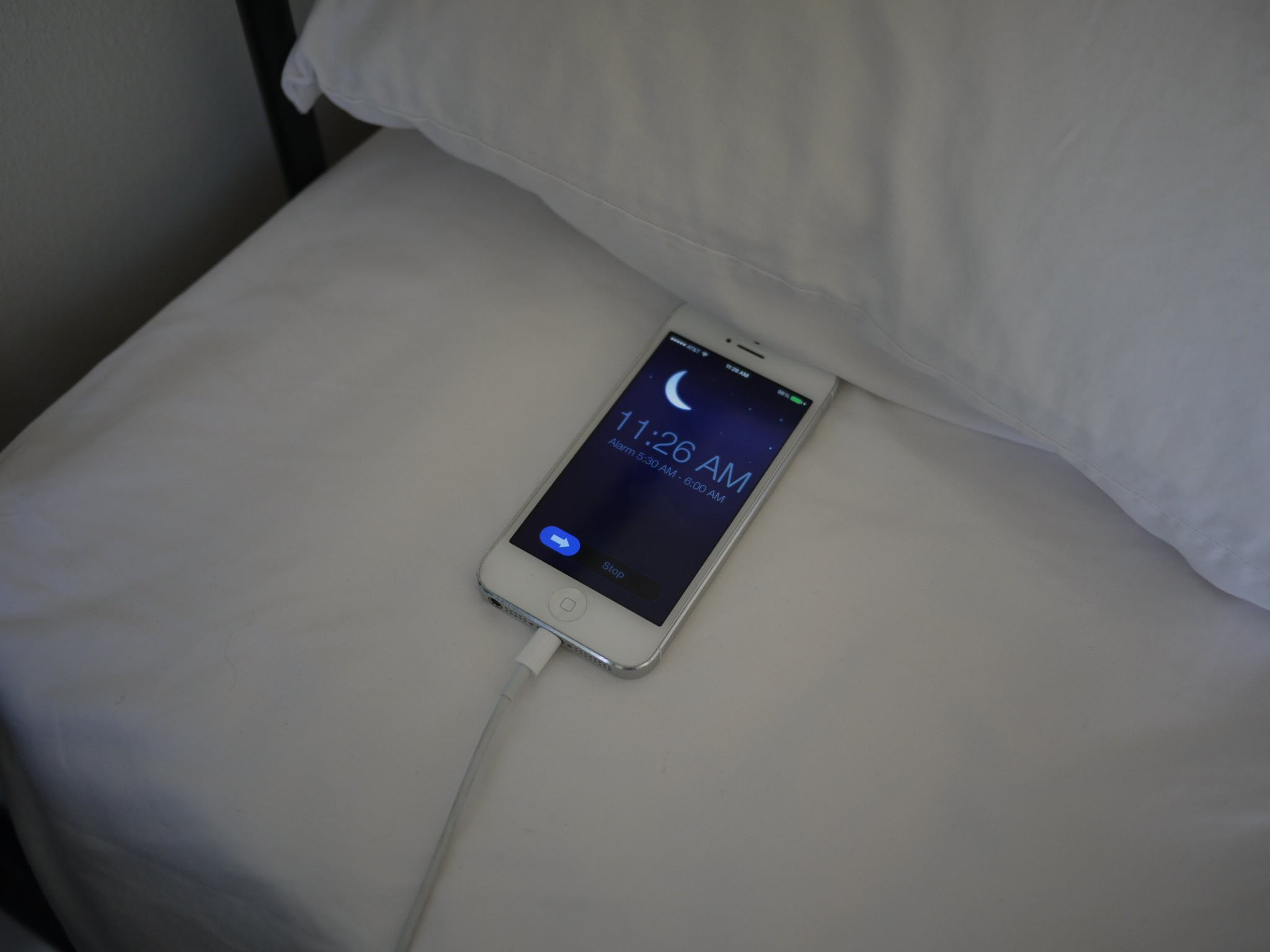 Sleep researcher Jordan Gaines Lewis wrote a great post about sleep-tracking apps on Psychology Today. She explains the short-comings of tracking sleep with an app on your phone—most of which boil down to the fact that they oversimplify the process.

Not only is sleep different for everybody, it can change a lot from day to day (or night to night). For instance, each night of sleep isn't a clean slate—it's affected by how well (and how long) we slept the night before. So if we missed a full night of sleep or had it cut short, we'll sleep longer the next night. In particular, we'll have more slow wave sleep, which adjusts to compensate for any we missed the night before.

We also tend to take a different amount of time to fall asleep every night. This means using a tool like Sleepyti.me can be problematic. This service tells you when to go to bed or set your alarm so you don't get woken up during a 90-minute sleep cycle, but it can't measure how long you take to fall asleep and take that into account. If you've tried a sleep-tracking app or device before, you've probably noticed that they often struggle to know when you fall asleep anyway—especially if you lie very still beforehand or move a lot in your sleep.

Speaking of 90-minute sleep cycles, they're something of a myth, also. Since different sleep periods are longer early in the night (show-wave sleep) or later on (REM sleep), your sleep cycles will change in length over the course of a night. Lastly, a lot of us briefly wake up and move around during sleep. If you've ever woken up to find you've thrown off your blankets because you were hot, you'll know what I mean. I've even woken up with my pyjama top half-off on a warm night; I obviously got stuck with all the buttons in my sleepy haze and gave up.

The problem with this is that your movement can snap your sleep-tracker out of sleep mode (has happened to me many times) or your movement can be tracked as restless sleep when in fact you're up out of bed completely, grabbing a drink.

As I've said before, this doesn't mean we shouldn't track our sleep at all. For those of us without serious sleep disorders that require proper sleep lab monitoring, basic at-home sleep-tracking can still be useful as a guide. Just keep in mind its limitations before you draw any conclusions about your sleep data.

So which app should you try? The basic features are generally quite similar in the most popular apps, but here's a run-down of a few to give you an idea of how they work. 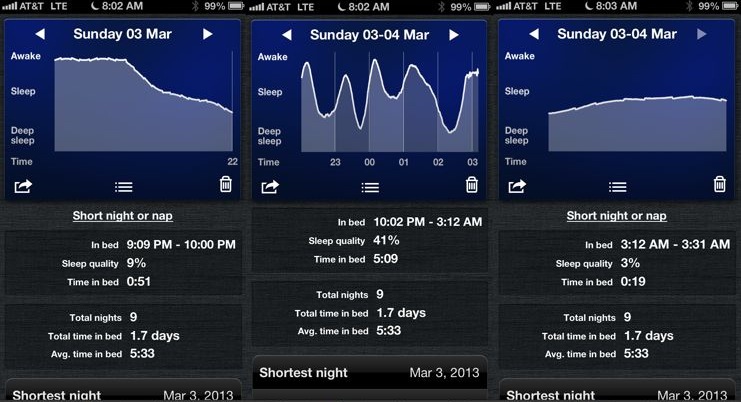 Sleep Cycle's main selling point is the smart alarm. It uses movement to determine which phase of sleep you're in, and wake you when you're in light sleep, so you won't wake up feeling groggy. Instead of setting a normal alarm, you choose a half-hour window for your wake up time and let the app decide when to wake you.

Sleep Cycle also lets you add notes about your sleep when you wake up, so you can tell over time whether things like exercise, alcohol or late nights affect how well you sleep. 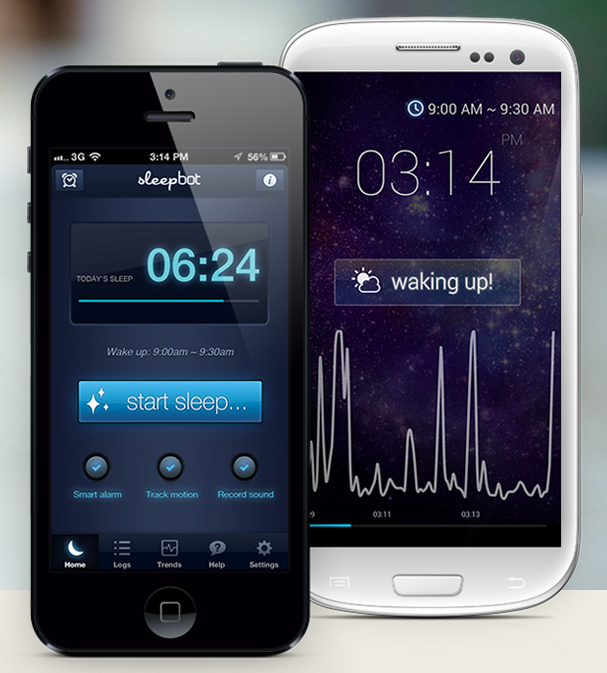 As well as tracking your movement during the night, Sleepbot takes note of sound levels around you, so you can match up any disturbances in your sleep with noises that may have caused them. It includes the standard "smart alarm" that most sleep-tracking apps have—supposedly waking you up at just the right time during your sleep cycle. The app also includes resources to give you an idea of what could be negatively affecting your sleep and how to improve it.

Sleepbot also has a web dashboard, so you're not tied to your phone when you want to check your stats.

Sleep Time is made by Azumio, the company behind ARGUS, which means if you're using ARGUS you can include your data from Sleep Time. Just like the other apps I've already looked at, Sleep Time monitors your movement during the night and wakes you up in a 30-minute window. 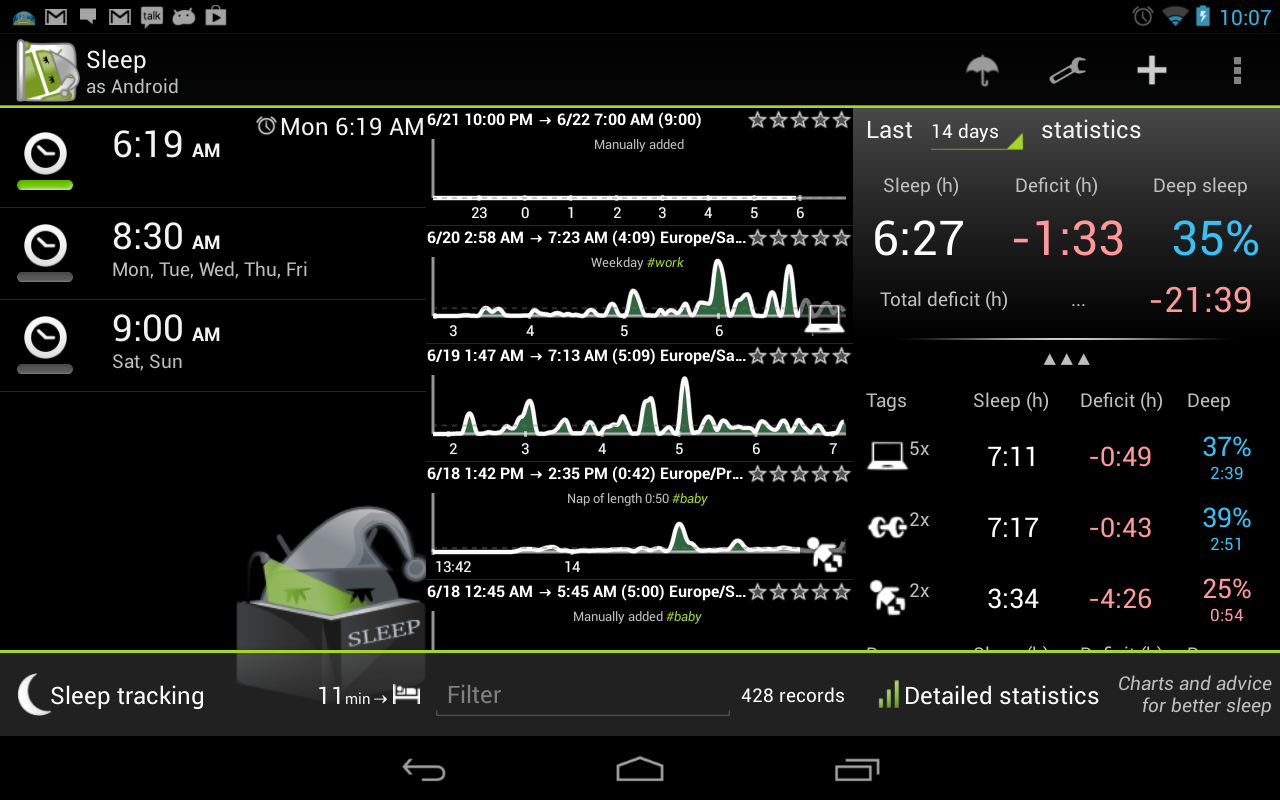 Sleep as Android is available for Android phones and Pebble watches. It has the same movement tracking and smart alarm that the rest do, plus it can record your snoring or sleep talking. It also connects to Philips HUE lights to turn them on when you wake up, and can give you a puzzle like a CAPTCHA or maths problem to make you wake up properly when your alarm goes off instead of drifting back to sleep. 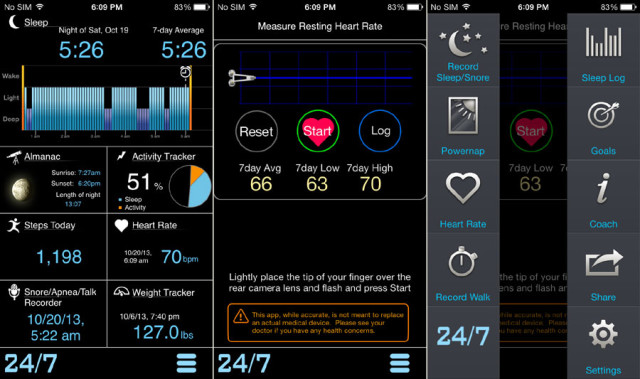 MotionX-24/7 is an iOS app made by the company that powers the Jawbone UP and UP24 wristbands. The app tracks sleep and activity during the day, so it can be used instead of a dedicated fitness tracker. It also uses the iPhone's camera to detect your pulse, for heart rate tracking.

The sleep section of 24/7 includes noise recording for sleep talking, snoring and sleep apnea, a smart alarm and a power nap feature.

A quick look in the iOS or Android app stores will show that there are hundreds of apps for tracking your sleep. These five are some of the most popular, so they're a good place to start if you want to experiment with sleep-tracking on your phone.

Want to get more from sleep tracking than just numbers? Let Exist do the work of figuring out what makes you sleep better or worse, and how your sleep, exercise, and habits affect each other. Check out Exist