Going analogue to get organised in 2016

I spent some time in December 2015 exploring different ways to keep on top of my workload. I was feeling a bit overwhelmed with everything I had to get done, and all the different projects I had going on at once.

After lots of experimenting, I finally came up with a system I thought would work for me, just in time for 2016. On January 1st I started using the Strikethru system in my notebook to keep track of all my daily tasks. In the past three weeks I’ve tweaked the system slightly to suit the way I work, and so far it’s proving very effective. Three weeks in, I’m feeling more organised and less stressed. 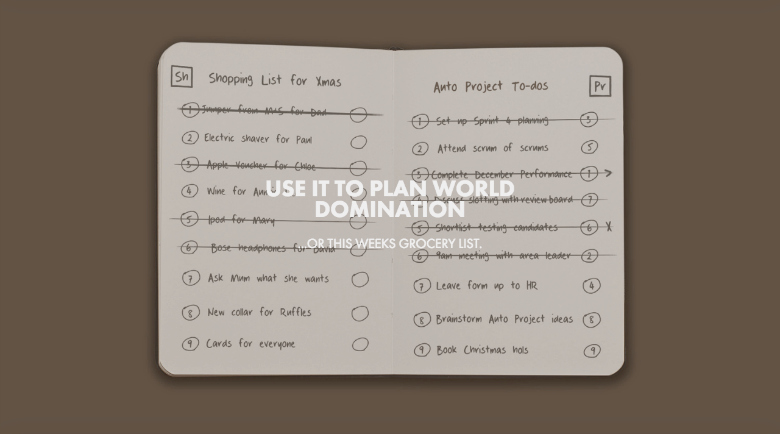 I won’t explain the original system in detail, so feel free to click through to the Strikethru site and read about how it works. I’m just going to explain the parts I use, and how I’ve adjusted it.

I’ve essentially designed a hybrid method that combines parts of the Strikethru system with some ideas I’ve picked up from the flourishing Bullet Journal community. Here’s how I use my current system to stay on track.

The main part of the Strikethru system is called the “Live list”. It’s a list of up to nine tasks you want to get done for today, with today’s date at the top of the page. (You can also keep it undated if you tend to take a few days to get through 9 tasks.)

Each task in the list gets numbered from 1-9, so you can reference them in other parts of your notebook (for instance, if you don’t get something finished today, and need to add it to tomorrow’s list as well).

This numbering system is one of the most clever parts of Strikethru: unlike the Bullet Journal system, which requires that you write tasks out over and over by hand (partly to force you to assess whether they’re really important enough to keep writing down, but I still find it a pain), Strikethru uses the page number (I use a Leuchtturm1917 notebook that comes with page numbers) and the task number to create an index number for every task. For instance, 205.7 would mean task #7 on page 205.

I do end up flipping back and forth between pages quite a bit, but the ease of moving tasks around by just writing down their index numbers is worth that hassle.

The limit of nine tasks on each day’s live list helps me prioritise and stay focused. I can’t add any more than nine items, so if more things come up throughout the day, I either switch out a task I’d planned, or schedule the new one for another day in the future and get back to working on my live list.

I add two things to the top of each live list page in my notebook which aren’t part of the Strikethru system: 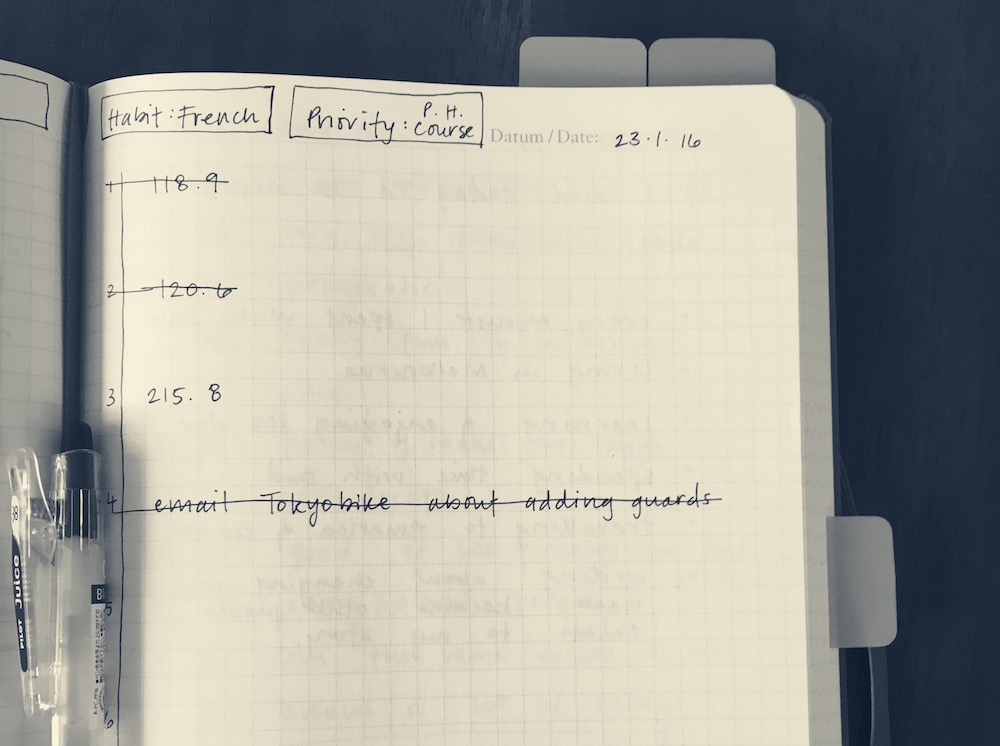 I try to focus on building just one new habit at a time, as I’ve found focusing on multiple habits at once reduces my success rate. Although the habit will be the same every day for a month or more, writing it down each day is a good reminder that it’s important to me. I strike a line through it once it’s done (Strikethru is so named because it advocates striking through task names, rather than using checkboxes).

My priority for the day can be a particular task, an ongoing project I want to make progress on, or an area of responsibility I want to spend more time on. It usually comes from either my most pressing deadline or whatever type of work I’ve spent the least time on lately (and thus has the biggest backlog).

I’ve also added two bullet types that I use on the left-hand side of the task numbers:

The Strikethru system comes with a method for prioritising tasks, but I don’t always follow my own prioritisation. I prefer to work through the list higgledy-piggledy, choosing tasks that match my current mood and energy level throughout the day until they’re all done. But I did want a way to note that some tasks need to take priority, so I started using an asterisk to mark those tasks.

The exclamation mark is rarely used. It usually comes up when I do part of a task, but am waiting on someone else to okay it or give me feedback before I can complete it. The exclamation gives me a way to see at a glance that it’s okay I haven’t crossed off that item yet, and I don’t need to spend time on it.

One thing I’ve never found a good way to manage with digital approaches is tasks I want to do “sometime this week” or “sometime this month”. There’s no good way to schedule a task for “anytime between these two dates”, so I either end up scheduling tasks for Monday and having them appear overdue all week until I get to them, or scheduling them for the end of the week—either way, they get a single due date that doesn’t really reflect when they actually need to get done. 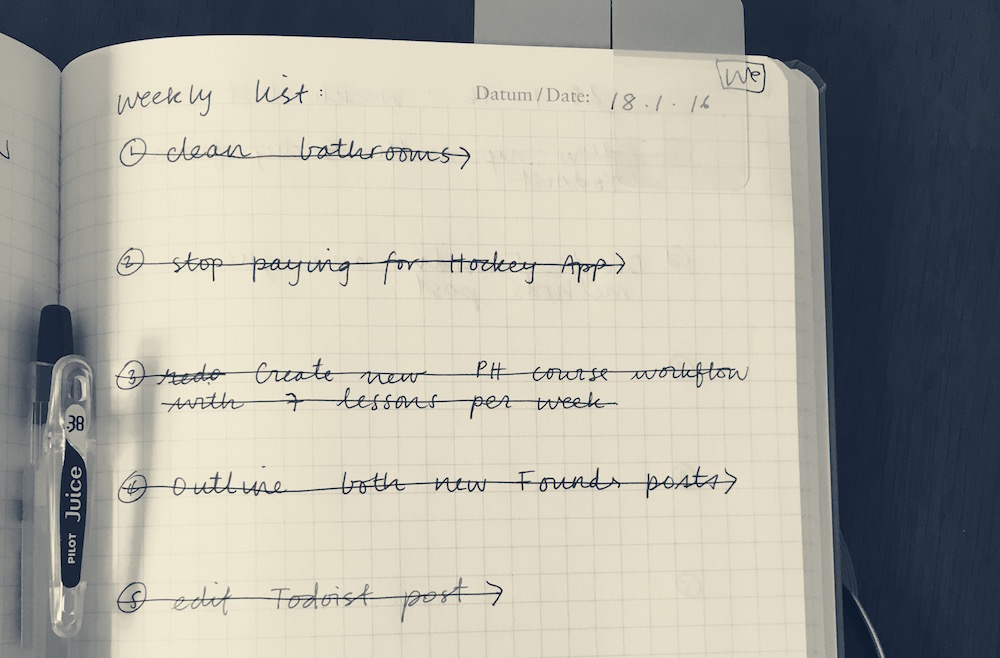 So I’ve added a section to my notebook to handle this. I’m using the vault, which is a notebook section you create when using the Strikethru system. It’s a section for creating lists for projects, shopping lists, goals, ideas, etc. The idea is to use the vault to store lists of tasks, and to pull individual tasks or whole lists from the vault into your current live list when you’re ready to work on them.

For the first couple of weeks I didn’t really know how to use the vault. I tried using it for project lists, but I’m so used to keeping those in digital task managers that the notebook approach didn’t really work. Now I mainly keep just two sections in my vault: a weekly list and a monthly “spread”.

The weekly list has Monday’s date at the top and a Post-It flag to help me jump to it quickly when planning my day. I use the weekly list to note down any tasks I want to get done sometime in the next week that don’t have a specific due date. Usually it’s things like errands, or work that’s not due for a couple of weeks that I want to make an early start on.

I try to check my weekly list every night when I’m planning my live list for the next day.

A “spread” is something you hear about more in the Bullet Journal world. In fact, the Bullet Journal community is so fanatical about customising their “BuJos” that they’re always coming up with new layouts for their various spreads. 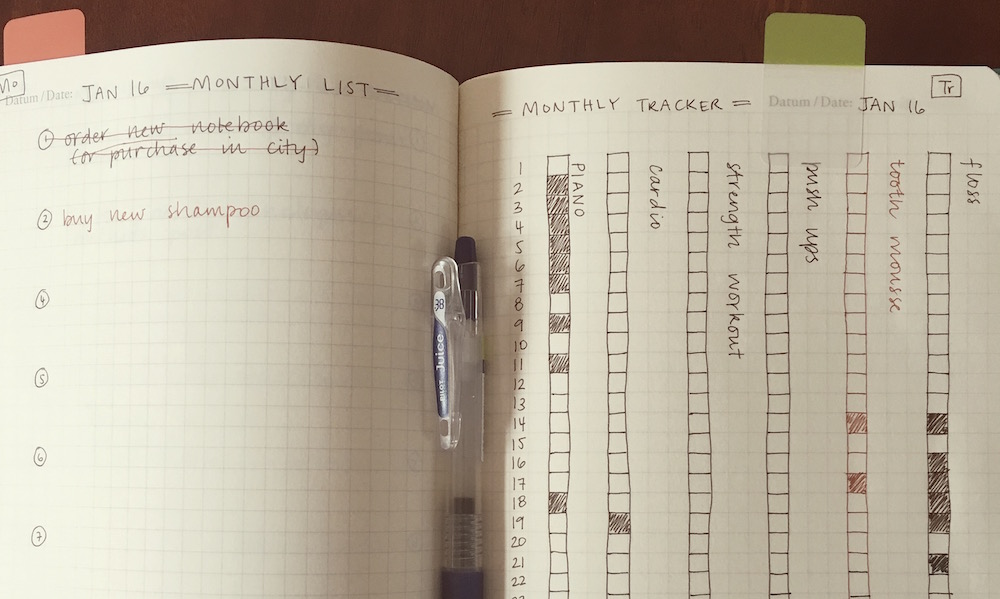 Anyway, I call this a monthly spread because it’s more than a list, and because it covers a two-page spread in my notebook. The left-hand page of the spread is a monthly list, just like my weekly list. It has the month and year at the top, and space for up to nine items, like every other list. (One thing I’m not sure about is sticking to just nine items on vault lists, since they often cover longer-term projects or periods of time. I may adjust this in the future.) 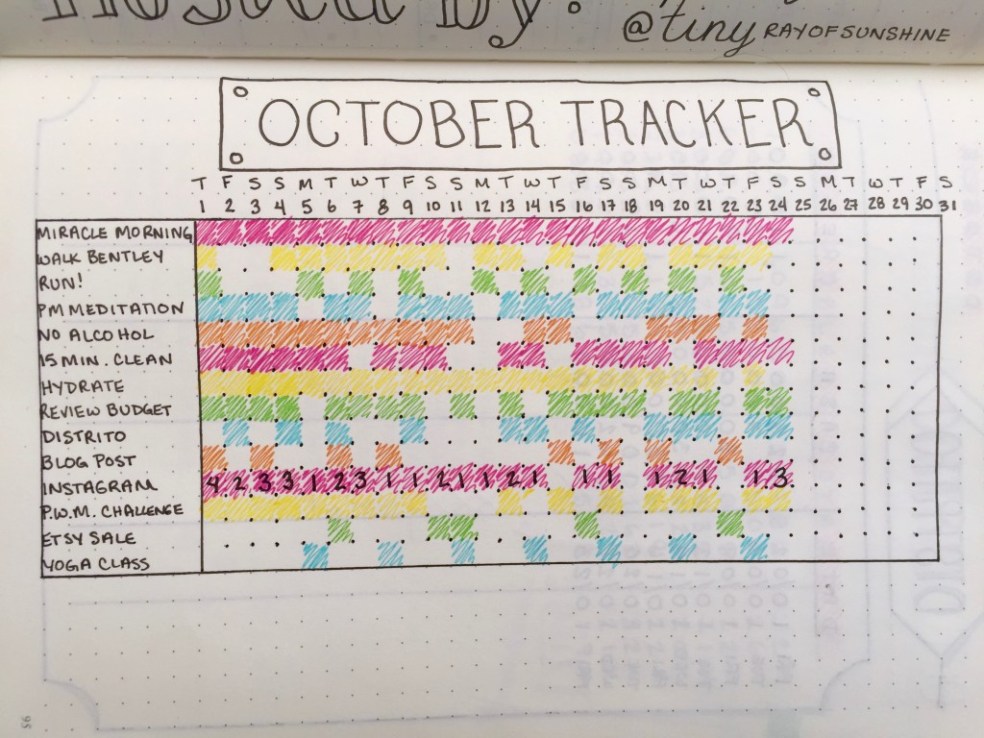 The right-hand page of the monthly spread has a mash-up of Rands’s trickle list and the habit tracker so many Bullet Journallers use (I think it originated with Boho Berry). This is where I track things I’d like to build into regular habits, that aren’t my current habit focus. Since I can only focus on one habit at a time, none of these are getting a lot of my attention, but I do like to have data on how often I’m doing them.

To avoid cluttering up the habit tracker on my phone, I use this page as a “track when I did this” approach, rather than a “try to do this on a schedule” tracker.

One reason this system is working so well is that I make the time to review everything at night. I could do this with a digital task manager too, but paper lends itself to a review much more easily.

Each night (if I remember) I run through this process:

And that’s pretty much it. This is always a work in progress, but I’ve been using the live list part of the system for the past three weeks. It’s proved to be a great way to feel more in-control of my workload, since I’m limiting how much I need to do every day, making today’s tasks very clear, and reviewing my work every night.