I’ve been having a pretty tough time lately. I was feeling a lot of pressure in my job at Ghost, as I was working on an audacious new content project and wanted it to go well. A few weeks into the preparation for that project I fell sick with shingles, and had to take two weeks off work (shingles is so nasty I’m still recovering, and may be for weeks to come). To top all that off, just before my second sick week was over, I got fired from my job at Ghost, which I didn’t expect at all.

Sadly, when times are tough, my good habits are harder to stick with—only, that’s when I need them the most. Eating well, exercising, practising my favourite creative hobbies, and looking after my body are even more important when I’m stressed, tired, or sick (or worse, all three).

I’ve been thinking a lot about the various habits I’ve been trying to build and how they’ve been affected by the turbulence of the past few weeks. Here’s what I’ve discovered about building healthy habits and sticking to them when it’s hardest.

Build one habit at a time

I use an app called Momentum to track my habits on my phone and Apple Watch. Right now I have seven different habits in Momentum that I’m keeping track of. 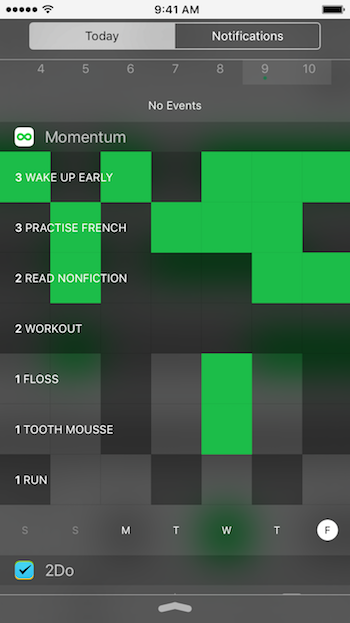 Not all of those are daily habits—you can see that running and flossing have greyed-out squares for the days I don’t plan to do them. But there are still a lot of habits I’m trying to keep up with. Each day there’s a minimum of five different habits I’m aiming to do.

When I was sick, I stopped doing almost all of those. Almost. Getting up early was the one habit I stuck with throughout my weeks of sickness and stress. I didn’t do it 100% of the time, but you can see in my graph below that I came pretty close. 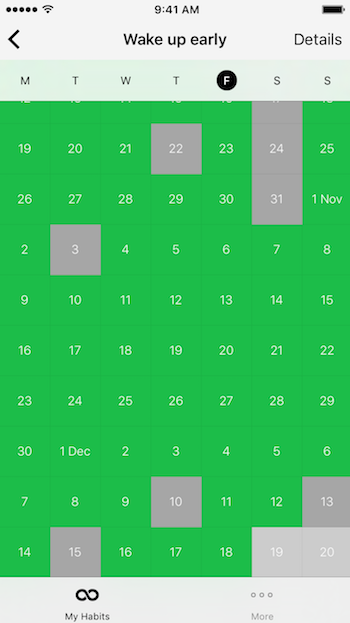 The cool thing about this is that I didn’t have to try to get up early. I got sick on November 25th. If you look at that graph, you can see that I had woken up early every single day for three weeks in a row prior to November 25th. And the week before that I only missed two days. And two days in the week before that. This habit was so solid by the time I got sick that I didn’t have to think about it anymore. I probably don’t even need to keep tracking it at this point, since I’m so used to doing it without trying now.

This is exactly what a habit is: a behaviour we do regularly without thinking about it. I wake up early almost every day. And when I wake up early, I get out of bed. I don’t think about whether I will get up or not, I just do it.

For many months in the past year, getting up early has been my main focus habit. It’s the one I’ve set goals for and reviewed at the end of each month. It’s the one I’ve had accountability partners for. All this focus on a single habit has helped me build it up to the point that it’s automatic now. If I had tried to build all seven habits at once, they all would have fallen away when I got sick—as the other six habits did.

The other habit I’m closest to solidifying is practising French every morning. 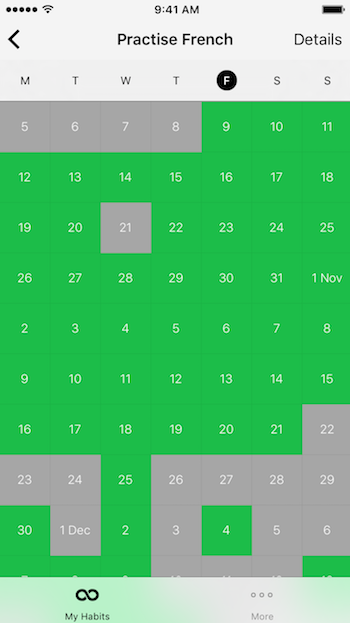 You can see in my French practice graph that I’d had a good run of keeping up this habit for four weeks in a row before I got sick. The week I got sick I struggled a bit, and then my French practice was sporadic while I got over my illness. The stronger a habit is, the easier I find it to keep it up when times are tough. Building a single habit at a time and focusing all my energy on it until it’s truly an ingrained behaviour is the best way I’ve found for solidifying a habit and ensuring I’ll be able to stick with it even when I’m not feeling great.

BJ Fogg has an excellent approach to habits called Tiny Habits. His idea is that you’re better off building the habit of a behaviour, even if it’s just a shadow of what you want that behaviour to become, than struggling to build an ambitious habit immediately.

Take flossing, for instance. If you go from not flossing at all to trying to build the habit of flossing every night, you’re asking a lot of yourself. It’s hard to stick to a new behaviour like that, and you’ll probably find yourself making excuses to avoid it before long.

If you take BJ Fogg’s approach, you might start by flossing just one tooth each night. The idea is to break down the behaviour into the tiniest representation possible. Flossing one tooth won’t do a whole lot for your dental hygiene, but it is a lot easier to convince yourself to do that when you’re tired or not in the mood than it is to floss all your teeth.

Breaking the habit down into this tiny representation takes away almost all the resistance you feel to doing it. So you stick to flossing just one tooth per night for weeks, maybe a month or two. By that time, you’ve built the habit of flossing every night. You’re so used to doing it that it starts to become automatic. There’s no resistance because it’s so easy to floss just one tooth. All you need to do now is add another tooth. You’re already flossing, why not do two teeth?

Of course, later, you add a third tooth. And you keep adding teeth until it becomes natural to floss all your teeth every night. But the trick is to focus on building the habit of doing that behaviour, regardless of how small a representation of that behaviour you’re focusing on.

Mikael Cho uses this trick for every habit he builds. When he wanted to exercise more often, he built the habit of just putting on his gym socks. Most times, putting on his socks was enough to get him in the mood to do his full workout. That one small start helped him build a habit of exercising regularly.

For my French practice habit, all I have to do is one lesson in Duolingo or Babbel. One lesson doesn’t take long at all, and I often do more, but when I’m not in the mood or I’m feeling tired, knowing that all it takes to let me check off today’s practice is one lesson makes it a lot easier to keep up that habit every day.

Every month I complete a review of my personal and professional life. This might sound strange, but I find it’s easy to lose track of what I want to get done and whether I’m improving if I don’t do a regular review.

My review covers things like what I accomplished in the past month that I’m proud of, which goals I achieved out of the ones I set for myself, how much money I spent, which books I read, and what music I listened to. It’s a mixture between a snapshot of my interests and hobbies at this point in time and a review of my progress towards my goals.

One of the main sections of my review is a look at the one habit I focused on for the past month and how well I stuck to my proposed schedule. In each review I choose a new habit (or sometimes the same one) to focus on in the month ahead, and I write a little bit about why it’s important to me.

Sometimes I’m tempted to skip this section, because it can often be hard to choose a single habit to focus on, but I force myself to do so because I find it’s the best way to make progress towards building my habits into truly automatic behaviours.

Once I’ve chosen a habit to focus on, I create a task in my task manager with a start date of the start of the month and a due date of the end of the month. I name it like this: “HABIT: flossing”. The start date makes it show up as in “in progress” task, so I see it every day when I look at what I need to work on. This helps me remember what I’m focusing on throughout the month.

At the end of the month I use Momentum to count up how many times I completed my habit, and write some notes about what held me back from completing it more often, and what changes I’ll make in the future to improve my completion rate.

Without this regular review, I’d forget to look back over my statistics to see if my completion rate is improving and how often I’m actually doing each habit. Having the stats available is nice, but it’s only useful if I put in the effort to review them and adjust my approach. I did this for months before I started to get up early on a regular basis. Many months I struggled to get up early even 50% of the time, but with each monthly review I made notes of what worked and what didn’t, and adjusted my approach for the month ahead.

The last thing that’s helped me most to stick with my habits during tough times is remembering why I want to do them in the first place. Each habit I start working on has a reason behind it. I want to get up early because I feel better when I do, and I get more work done if I start my day early. I want to practise French every day because I’d like to know it fluently and I make more progress when I do a little bit every day. I want to floss three times per week because I recently paid my dentist a small fortune to fill holes in my teeth and I’d rather not do that again!

The “why” behind each habit I’ve started tracking is easy to forget when I’m not feeling well. Sometimes all I think about is filling in the empty square for that habit today and how much effort that will take. But if I remember why I started working on it in the first place, I find a little extra motivation to stick with it.

There’s nothing fun about feeling down, or being unwell. I hope these techniques will help you keep up your healthy habits and look after yourself next time things are tough: build one habit at a time, start small, review regularly, and remember your "why". And if you have any tips yourself, I’d love to hear them. Find us on Twitter at @ExistApp or chat to me at @BelleBCooper.