How can we measure productivity accurately? 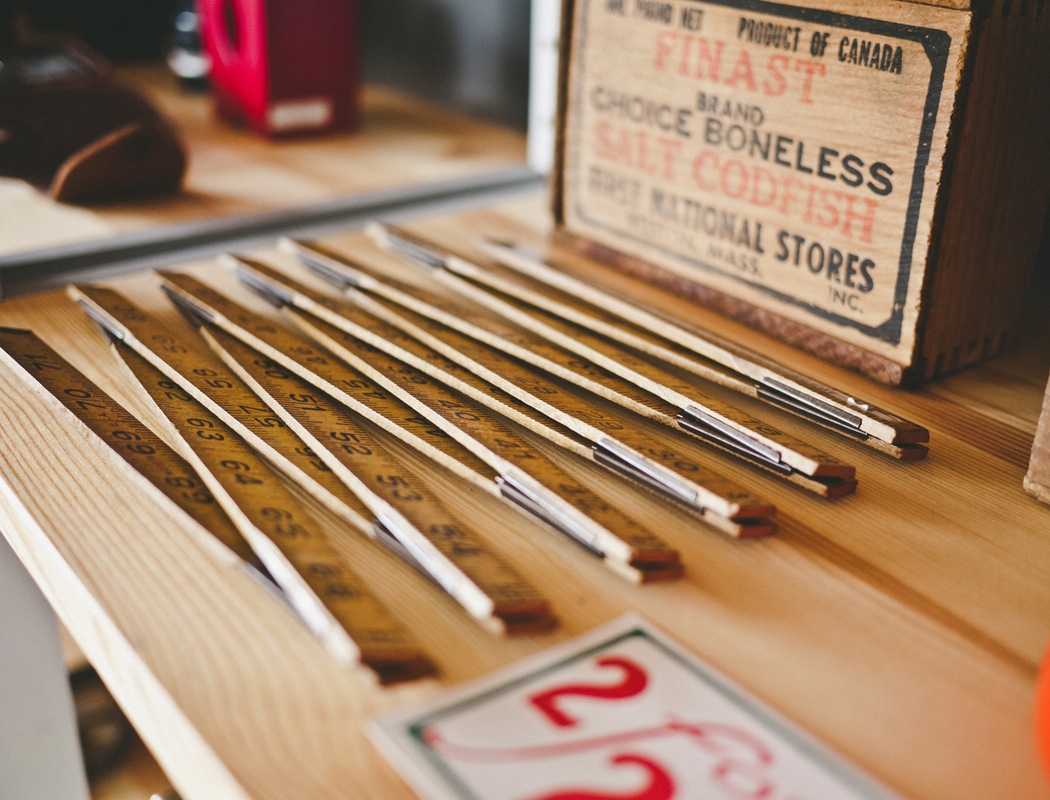 Last week we integrated our most oft-requested service, RescueTime. A lot of our users have been asking for this integration so they could see how their productive time correlates with other things they do.

RescueTime is a program that runs in the background on your computer, tracking which apps you use and websites you visit. You can categorise each app or site on a scale from highly distracting to highly productive (including neutral in the middle).

Sometimes this works perfectly. If I'm using a writing app, for instance, it's very likely I'm working on something highly productive. But other times this method of categorisation isn't quite enough to accurately measure whether you're being productive or not. You can spend time in the same app doing different things, making it sometimes productive and sometimes distracting.

For instance, Josh and I use Viber to communicate day-to-day. Sometimes we're chatting about what to have for dinner or sharing silly links from Twitter or Reddit. Other times we're having serious discussions about work. I've categorised Viber as neutral, because it's so up-and-down.

On the other hand, Josh and I use Slack for Exist-related discussions only. We share new ideas, new work for the other person to look at, and links to relevant news in Slack. I can categorise Slack as highly productive and it will be correct most of the time.

I love using RescueTime, especially now that I can see all that data in my Exist account. I can look at how my productivity is affected by my level of exercise, amount of sleep, bedtime and wake time, the weather, and more. I've found that I tend to tweet more on days I'm more productive (I guess I like to brag about getting work done?), I'm more likely to be productive when I listen to music, and I'm a little less likely to be productive on hot days.

But I also wonder what other methods we have for measuring productivity in different ways. Productivity is a tricky thing to define, because it can be different for different people, different jobs, even different days. On some days, I really need to spend hours in my inbox—that's productive. On other days, I have more pressing work to do that I'm avoiding by spending time sending emails. The same task on different days is a different level of productive for me.

How else can we measure productivity?

I'm curious about whether a subjective productivity score would be useful, and how it would compare to objective measures like RescueTime. We have a mood tracking feature built into Exist that sends you an email every night at 9pm asking how your day was. You respond with a score from 1-5 and a note. This could be an option for scoring our own productivity, but I also want to look at other possible objective measures. 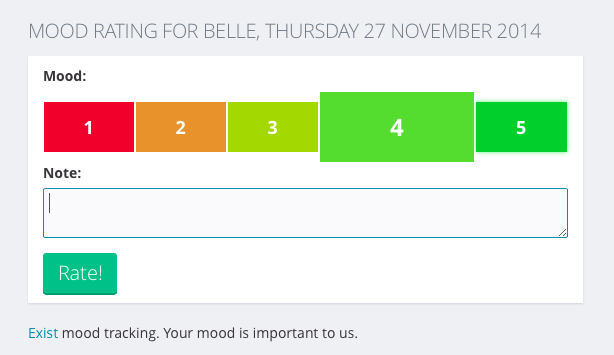 For writers, word count is an obvious measure. Many writing apps include a word count per document, so you could manually add up your total word count across a day.

To make it even easier, there are tools like Word Counter that let you choose which programs are for writing, and will tally up your word count over time.

For me, this wouldn't be a complete picture of my productivity, but I'm curious to see how much I write per day, what times and days of the week I write more, and so on. Combined with RescueTime data and other measures of what tasks I worked on, this would be a helpful metric.

An Exist user recently shared with me how they measure productivity: they monitor the changes in file or folder size of what they're working on. If you're working on something that will keep growing, this could be a simple (though mostly manual) measurement to show how much work you've done each day.

If you spend a lot of time with files without changing their size (editing images or documents, for instance), that might not work. It's definitely suited to specific types of work.

I've never been good at sticking with a Done list, or an "Anti-To Do list". The idea is that you write down everything you do in a day regardless of whether they were on your initial to do list or not, so that by the end of the day you can see how productive you were, and where all your time went. For most of us, the few things we cross of our to do lists don't actually add up to all the time we spend working. It's nice to have a record of everything you've done in a day, and I'd be especially interested to see an analysis of how often I do different types of tasks.

Buffer's CEO Joel Gascoigne uses a Done list, and says it helps him stay productive throughout the week. Previously, he says, he would be "knocked down" a little when extra tasks came up that took his focus away from his planned to do list.

Manual tracking and analysis is a pain, but if you were willing to put in the effort to complete a Done list everyday, I expect there'd be a wealth of data to be collected about what you do and when.

Some task managers have productivity stats or scores built-in. Todoist has its own "karma" score that takes note of how many tasks you complete, and takes off points for letting tasks become overdue. I'm not a huge fan of tracking productivity based on the number of tasks you do per day, but if you want a measure that doesn't require any extra effort, Todoist's karma could work. 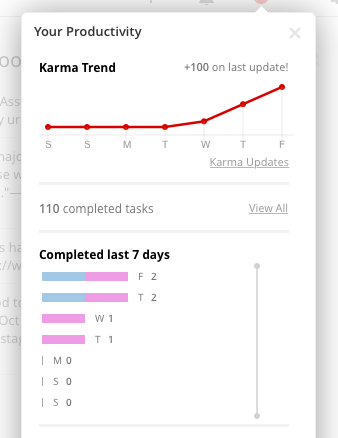 TeuxDeux recently added productivity stats to their web app. The stats are based on how many tasks you complete per day, but don't seem to be affected by letting tasks rollover. You can see which day of the week and what time you check off the most tasks.

I mentioned a subjective score for productivity, but I'm also wondering if it would be possible to define a simple, yet more accurate, approach to scoring your workday. For instance, rather than rating your productivity overall or just adding up the number of tasks you completed, what if you scored your day like this:

With this scoring system, your productivity score would be weighted depending on how important the task is, as well as what it requires from you. Just like when I get more points on my Misfit Shine from a run than a walk (more physically demanding), doing important, hard work would earn me more points than doing the small, easy stuff I can quickly knock off my task list.

Some agile development methods include a scoring system of points based on the size and complexity of a new feature. This is sometimes done as a team with everyone agreeing on the score for each feature before the work starts.

Just like manually tracking everything you do in a day, scoring your workday could become tiring and effortful. RescueTime's killer feature is that it runs in the background—no extra effort for me, but every day I can see how I'm spending my time. And with that data in Exist I can now see how I'm tracking against my average for productive time. 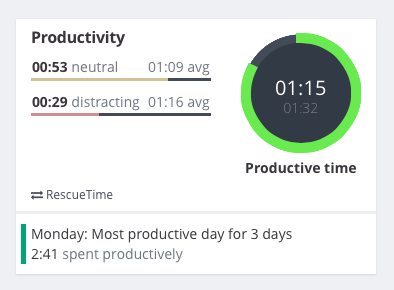 We're looking forward to having more productivity related data in Exist so we can help you work towards work/life balance. For now, I'm going to test out some different methods of measuring my own productivity to see which ones work together to give me the best overview.

Exist + RescueTime lets you track your productivity, exercise, sleep, and mood in one place. Try it for free.