Misfit Shine: this is not a review

I’ve had a Misfit Shine for a couple of months now, so I thought it would be interesting to look at what I like (and don’t like) about it and how it compares to other fitness trackers I’ve tried. But since I’m only going to cover the things that I care about, this isn’t really a review—it’s just some thoughts on my experience so far.

If you’re thinking about buying a Shine, or just want to get a better idea of how it works, hopefully you’ll find this useful.

Right now I’m wearing both my Shine and Jawbone UP on the same wrist, with a normal watch on the other. I’d love to replace my watch with a fitness tracker at some point but so far the Basis watch seems to be the best candidate, and since there’s no open API for the Basis we can’t integrate it with Exist (obviously this wouldn’t be a consideration for everyone, but at least having plans for an API, which the company behind the Shine does, is a prerequisite for me).

The Shine itself is really small—easily the least bulky thing I wear. It’s a round metal disc around the size of three American quarters, or two Australian twenty-cent pieces. It snaps into four different accessories to give you flexibility in how you wear it, two of which come in the box: a magnetic clip and a rubber watch-like sport band. You can also purchase a necklace and a leather wrist-band separately.

I wear mine in the waterproof sport band, so I don’t have to remember to move it when I switch clothes, and I can wear it in the shower (or the rain). I find the band really comfortable to wear, especially since it’s so light and flat enough to fit under my sleeves. The clasp occasionally catches my hair, which is pretty painful, but that’s my only complaint about the band.

When it comes to actually tracking my activity, the Shine has some features I really like. One of the best is the visual feedback that tells me how close to my goal I am. The Shine has 12 lights around its face that light up to indicate how much activity I’ve done. My Jawbone UP, on the other hand, doesn’t give me any indication of how I’m doing until I sync it with the mobile app. I haven’t compared the Shine to using a tracker that shows an actual step count on the device yet (I’m trying to procure a Fitbit Force at the moment), but I have an idea that filling up the circle of lights will actually be more motivating than watching a number count go up.

Having said that, there is a big difference between how the Shine tracks activity and most other trackers, which use step counts. The Shine app lets you set a goal of “Shine points” which translate into activity, in a similar fashion to Nike’s Fuel points system. By using points, the Shine can track activities like swimming and basketball, and give you appropriate credit for them. This is especially noticeable for me when I go running. I often find that my 1000 points goal is almost equivalent to 10,000 steps if I’m just walking, but the Shine awards more points for higher-intensity activities than it does for casual walking. So when I go for a run, I can sometimes achieve my 1000-point goal without clocking more than 7000 steps. 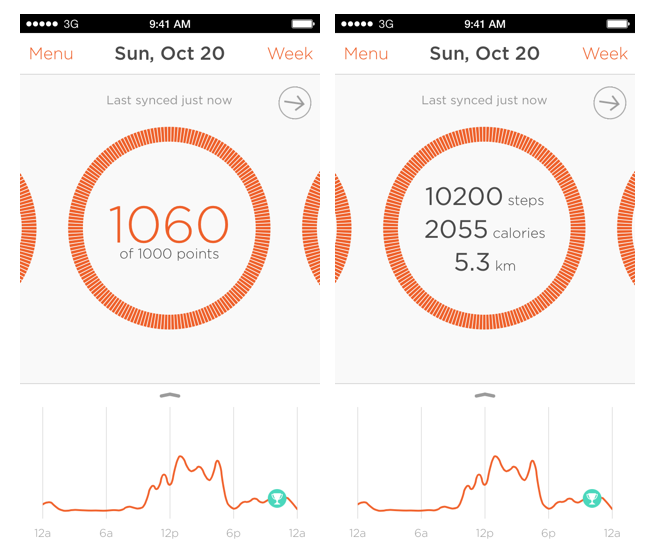 I actually like this, because it motivates me to do more high-intensity activities to reach my goal, rather than trying to squeeze in an hour-and-a-half of walking every day to get to 10,000 steps. 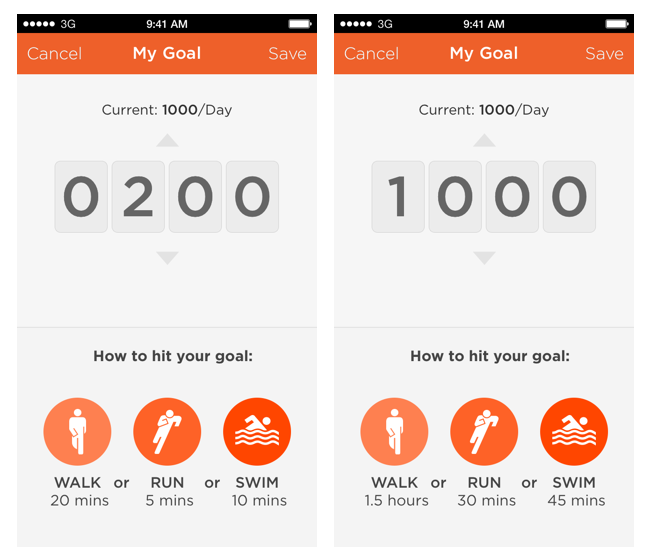 The app also gives you a good idea of how to achieve your goal. When I set 1000 points as my goal, for example, it shows an estimate of walking, running and swimming time that would achieve this (that’s where I got the hour-and-a-half of walking example from). Once I’ve added some activity and synced the Shine, the app will show me how much of my goal I’ve completed on a circle graph and estimate how much I have to go, like “15 minutes of walking left.” This is a really cool way to reframe the task of getting those 1000 points, rather than wondering how much exercise it’ll take to get another 300 points and just winging it.

With iOS 7, the Shine app has added background syncing. This is handy, although it doesn’t happen very often, which is probably because the Shine itself has to be really close to my phone during the entire sync, and I probably just don’t hold it there very often. Even though when I manually sync I have to hold my wrist near my phone until it’s done, I still prefer this to the Jawbone UP’s sync method. With the Jawbone, I have to fire up the app, take off my wristband and plug it into the phone. The small pain of doing that means I rarely sync more than twice a day (although, since we just added Jawbone UP integration to Exist, I may find myself doing it more often now). Unlike the rechargeable UP, I do have to replace my Shine battery, eventually. While I’m not looking forward to that, it seems a minor annoyance compared to the effort of recharging my UP band once every week or so.

The Shine app itself is fairly basic, but I think they’ve made some good choices about what to include at this stage. There are no friends or social elements, but I don’t miss them at all. I really love the weekly graph, which shows me a progress line of how I’m doing this week compared to my average. 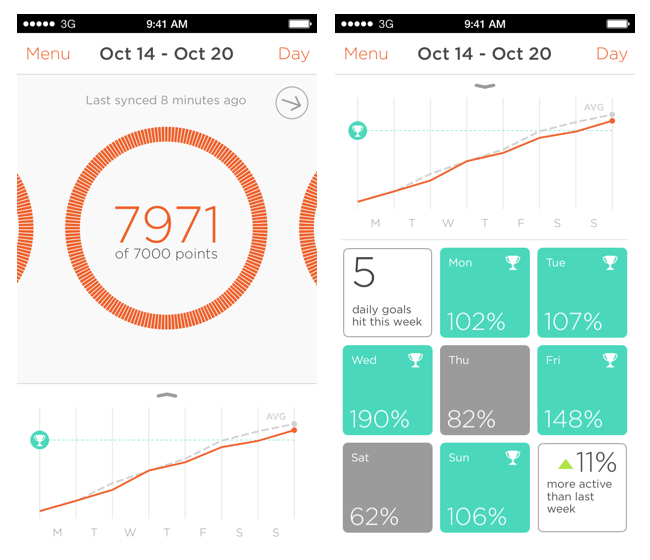 In the daily views, each day gets filled with tiles, most of which correspond to activities. For instance, a run or a 20-minute walk will get a tile that shows how long you were active for, at what intensity and how many points you were awarded. 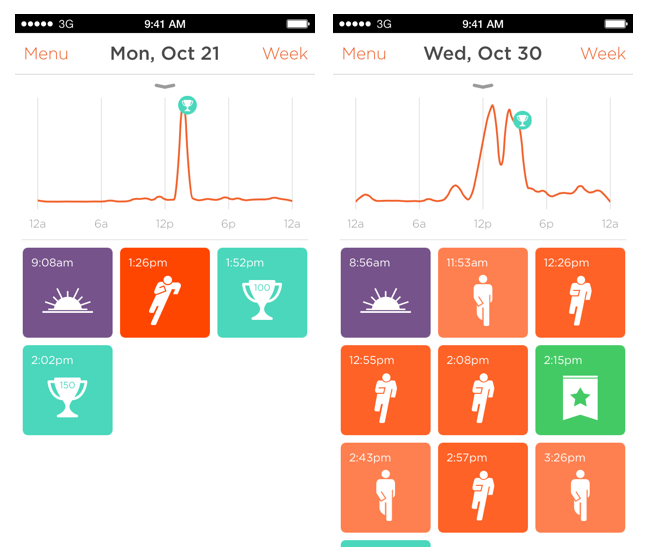 You also get sleep tiles which show a graph of light and deep sleep and awake periods when you tap it. I love looking out for special tiles, such as beating a personal best or achieving my goal. I’d love to have a way to see these somewhere all the time—what my personal best is currently, and what special achievements I’ve reached (for instance, today I got a tile that said I’ve walked 250 kms since using the Shine).

The app’s seen regular updates in the past couple of months since I’ve been using it, which is a good sign. I also hear that automatic sleep-tracking is on its way, which will hopefully work well. I’m terrible at remembering to set sleep mode, and because there’s no way to tell what mode the Shine is in, I never know when it’s decided to wake up out of sleep mode, since it does this automatically. This is one area where it’s trying to be clever, but it’s taken a bit too much control away from the user. Compared to my Jawbone UP, though, the app seems to stay asleep much better. I have regular issues with my UP band jumping out of sleep mode when I wake up during the night (or sometimes while I’m still asleep), making my sleep data fairly useless. The Shine is better, but I’d love to see both of these devices add the Fitbit’s retroactive sleep tracking, where you can tell it the next morning what time you were asleep and it translates the data it tracked into sleep movements. So clever.

Something else the Fitbit (and the UP, for that matter) has over the Shine is the button mechanism. Using a solid button makes for a very clear decision by the user, which the device can interpret. The Shine, on the other hand, relies on user taps: two to see your goal progress and three to set sleep mode (or whichever special tracking you’ve set up, like swimming or basketball. You can only have one at a time, which is set through the app—terrible if you want to track sports and your sleep. What a run-around! This feature is in beta though, so hopefully a better UX is planned). While this is fun, and it means when I show the device off to friends they can have a tap and see how it works, the Shine sadly has quite a bit of trouble distinguishing how many taps I’m doing. I’ve read in reviews that other people have had this issue as well, so I hope there’s a way this can be improved later on. My Shine often takes multiple attempts to register any taps, and often registers my three taps to set sleep mode as just two, and shows my goal progress, or vice versa.

There’s also a clock option which can be switched on or off via the app. I thought this was really cool at first, but it turned out to be such a slow way to check the time that I turned it off. I’m not sure how to make this better in the future, but I’d love to be able to switch the Shine onto my watch wrist and get rid of my analog watch altogether.

Lastly, the API. Apparently this is in the works. Hopefully it’ll be opened up soon and we can integrate it into Exist.

If you’ve used the Shine, I’d love to hear about your experience with it, as I’m sure you love and hate different parts of it to me. Catch me on Twitter at @bellebethcooper

This post was originally published on my personal blog.